Check out the Books for Sale tab above to see the wonderful titles that would love to live on your shelves!

Benefit Concert to Save the Library! 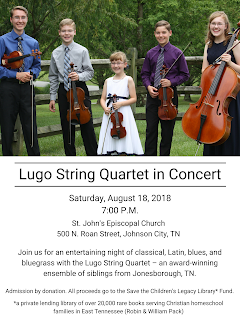 On June 8, 2008, Children's Legacy Library opened its doors as one of only a handful of homeschool lending libraries of living books in the nation.  The library recently celebrated 10 wonderful years of putting thousands of living books into the eager hand and hearts of dozens of children.

Why was there not a celebration post on this long-neglected blog?  Because our family has been in dire financial circumstances for some time and I knew the future of CLL was hanging in the balance.

Our family owns a pharmacy in our small town.  It's a wonderful place from yesteryear, a lost part of small town Americana with a lunch counter and tons of personality.  My husband started working there in 1977 while he was in high school doing the things our boys are doing now.  He went to pharmacy school and came back to work there until we bought it 17 years ago.

The last several years have been very difficult financially.  Changes in health care, which have been many and varied, have been devastating to us.  Often we are not reimbursed at all for prescriptions filled.  Many days my husband prays for a slow day at work because a busy day means a high drug bill in order to restock inventory that we won't be paid for. We have been living off of our savings for quite some time, selling things as we could.  Our only debt is our mortgage which is due to come to an end in February.  We live very frugally.

Last week we had almost come to the end of our savings with too many bills to pay.  I looked at my husband and said, "I have to sell the books."  He looked back at me with tears in his eyes and nodded his head.

My initial plan was to sell 1000 of the less desirable titles.  As I was pulling those, the thought of God calling to Abraham and saying, "Abraham, you must sacrifice your son, your only son Isaac," and I thought..."This is not enough.  I have to sell my best."  So, in tears, I started pulling hundreds of books beginning with my most precious and rare, with the intention of selling at least half the library.

When I came to the history section and trying to wrap my brain around getting rid of all those beloved series...Landmarks, Signatures, We Were There's, Piper, North Star, Garrard, Childhood of Famous Americans, Immortals...I knew I needed help...and prayer.  I hurriedly wrote a message to the trusted librarians in our yahoo group and briefly explained my situation without giving too much detail.  I just asked them to help me think through what I was having to do.

At that point, it was all out of my hands.  God took over by using His people to enact a plan to rescue this library (and our farm) from ruin.  Without my knowledge a dear librarian on the other side of the country whom I've only met through the library email group set up a Go Fund Me page to "Save the library!"  Librarians across the nation have rallied together to raise support.  Local friends have been working tirelessly on a campaign including offering a benefit concert featuring an international award-winning string quartet (who happen to be some of our dearest people on earth.)

I don't know what the future holds.  The pharmacy is still in deep trouble.  But...

And as has been demonstrated time and again God really does care about these libraries.
Posted by CLL at 8:16 AM No comments:

I know that I have life
only insofar as I have love.

I have no love
except it come from Thee.

Help me, please, to carry
this candle against the wind.

The best teachers are those who show you where to look,
but don't tell you what to see.

After the Dancing Days ~ A Review

After the Dancing Days
by Margaret I. Rostkowski

This book is set in 1918-1919, right after WWI.  It has 217 pages and 30 chapters.  Not difficult to read and honestly does not seem long enough when you get involved in it.  This book is not slow-moving and overall excellent.

When Annie's father, a doctor, returns home from the war, he decides to work at the hospital. Annie's mother tells her to stay away from the hospital, but Annie disobeys while her mother is on vacation and goes anyway.  While there, she becomes acquainted with a burn patient named Andrew who has become bitter and withdrawn.  When her mother returns, she gives Annie permission to continue to visit the hospital.  Annie helps Andrew realize that he can still find joy in a new life.  I would not recommend this book for children under 9.

Awhile back I invited young readers in the library to write reviews of favorite books.  I'm excited to share my first guest post.


I think this book is very good because it is filled with so much love, joy, and laughter that it fills my heart with warmth to read it.  Hannah's Fancy Notions is about a young girl (age 10) named Hannah who starts making band-boxes (a type of suitcase) for the working girls of Industrial New England.  She enlists the help of her family as the simple matter of making a band-box  for her working sister's birthday ends up being a full-time operation making band-boxes for everyone she knows and doesn't know!  (The band-boxes were originally made to substitute for poor looking bags that the working girls tried not to have people see.)  Let the warmth spill into your heart as you read this lovely, well-written book.

Note:  This book is part of the Once Upon America series.

If you have questions regarding library membership, using living books in your homeschool or starting your own library, we'd love to hear from you. Contact us at:

These affiliate links help fund the library. Thanks for your support!